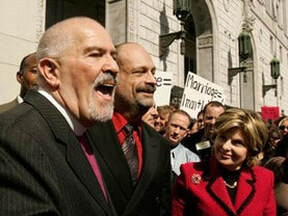 Troy Perry led a historic opposition to the defeated 1978 California Briggs Initiative, which was written by lawmakers to ensure gay and lesbian teachers would be fired or prohibited from working in California public schools, and was a key leader in the fight for marriage equality.

​In 1970, he conceived the first Gay Pride Parade and co-founded the Christopher Street West organization to launch the first LA PRIDE event following the 1969 Stonewall Rebellion. ​He is perhaps best known as the founder of Metropolitan Community Churches (MCC), the first church to recognize the spiritual needs of the gay community, which sparked a worldwide movement.
Shape Divider - Style triangle
Winning entries are entered into the ​Outfest UCLA Legacy Project Collection, the world's leading archive for LGBTQ moving image media preservation, through UCLA Film & Television Archives.
OUR PRIDE    A Movement of Compassion